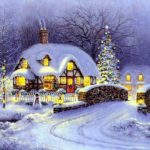 The House of Claus (download pdf or order by mail)

“The House of Claus” is the legend of Saint Nicholas.  Nicholas and Christina Claus lose a child at birth.  Christina is told she can never have children.  Because they love kids so much, they “adopt” the children of their town.  Each year they make toys for the children and give them away at the town Winter Festival.  After many years, their service is rewarded.  In their old age, a miracle son is born to Nicholas and Christina.  Nicholas and Christina are given a special calling to serve the children of the world.  Nicholas is asked what powers he will need.  He requests the help of friends to make toys, the ability to enter any house, and that his reindeer will be able to fly.  The Clauses do not, however, receive immortality.  Instead, they are promised that each generation in the “The House of Claus” will have a son.  The title of “Saint Nicholas” will pass from father to son within “The House of Claus” until the end of the earth.  house claus christmas book santa claus

The second half of “The House of Claus” is set in the present.  Patrick is a young widower.  He is left to raise two children alone.  Lisa, a young widow, has two children about the same age as Patrick’s.  Lisa has lost everything and is on the street.  One of Lisa’s children, Josh, writes a letter to Santa Claus asking for a new family.  Saint Nicholas, the twentieth, responds personally.  Santa helps Patrick and Lisa meet in a homeless shelter where Patrick is trying to rekindle the Spirit of Christmas in his children.  Saint Nicholas continues to show up at just the right times in disguise.  On Christmas Eve Santa gives Josh’s letter back and appears to the children as himself.  Lisa and Patrick realize how much they need and love each other.  They exchange the rings Santa left as presents.  Patrick proposes and Lisa accepts.  The last scene shows Saint Nicholas and Mrs. Claus, the twentieth, sipping hot chocolate in rocking chairs as their ten-year-old toe-headed son, Santa, the twenty first, rushes into the room asking to ride one of the reindeer.  Nicholas reminds his son of the reindeer riding rules then lets him go.  Nicholas mentions to Mrs. Claus that their son is getting old enough for training to begin next Christmas Eve.

Basically, “The House of Claus” is a delightful Christmas story of how Santa Claus became who he is.  It begins at the beginning and transforms through to today.  You will have a smile on your face the entire time you enjoy reading this fabel.

There are no reviews yet.