View Cart “Nightmare Waltz (orchestra download sound order by mail)” has been added to your cart. 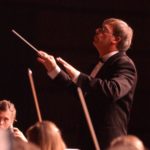 The Portrait the musical (order by mail – rental only)

Act I.  A gala ball given by some elitists, Henry and Cornelia, with a ballroom production number opening the show.  Introductions are made and people meet while waltzes and tangos are danced in lavish gowns and decor.  As part of the ball, the entertainment includes the song “Dream”, sung by Sybil.  Dorian and Sybil meet and it’s love at first sight (like Tony and Maria).

Basil Hallward paints a portrait of Dorian Gray.  Basil wishes that somehow the portrait will come alive (not literally) and become a masterpiece.  He sings “Beauty May Endure” while he paints the portrait of Dorian Gray.  Henry, a friend of Basil’s, tries to convince Dorian of the joy of worldly pleasures of which he should partake.  This is followed by a small production number, trio, “Wicked for a Day”, as these three main characters meet at Basil’s studio.

Dorian falls in love with Sybil Vane whom he met at the ball and has been seeing and plans to marry.  The song, “Where Lovers Go” (the Italian love song as I call it), is sung here.  It is a duet detailing what they will do when they marry.  Later in the scene her brother comes for her and they sing a duet and then as the scene ends, she sings “Take My Hand.” to her brother.

Later, at Dorian’s estate, he prays, (sings “Prayer Song”), that he could forever be as young and handsome as his portrait, hence completing the curse.

Dorian then takes his two friends, Basil and Henry, to the theater where Sybil sings.  At the theater she sings “Prince Charming”, which she is singing to Dorian.  While they are watching the performance at the theater, she becomes jealous of the woman always swooning over Dorian and goes back to her dressing room to cry on the shoulder of a friend.  When Dorian goes to her dressing room, he sees her in another man’s arms and becomes outraged and furious and leaves her.  By the time he goes back to “forgive her” (as if it were her fault), she is gone.  Under the sinister influence of Henry Wotton, Dorian is convinced to forget her and become corrupt and debase as Henry is.  Dorian notices the portrait is becoming hideous as he keeps going out with Henry.  It becomes Dorian’s curse and reflection of his soul while he doesn’t age.

At the end of a lavish production number in the street a few months later Sybil finds Dorian and tries to tell him that she is going to have their baby.  She sings “Lullaby of Love” and ends Act I.

Act II.  Basil and Dorian meet after not having seen each other in 10 years.  Dorian takes Basil to his house and shows him the portrait, which is hideous.  Dorian tries to stab the portrait with a knife, as he had previously attempted, (but the portrait stopped him), as he tries again Basil, in the act of stopping him, is accidentally stabbed and dies but not before he offers his death as a sacrifice for Dorian to repent so that his death would not be in vain.  An ensuing fire accidentally burns the house down but not before Dorian takes the portrait and a few other special items.  Henry witnesses all of this as he had almost entered Dorian’s house.  Dorian starts a new life as he tries to repent of his past and make amends.  In the process of good deeds, he is also looking for Sybil.  The portrait’s curse starts to be reversed.  For every good deed he does, the portrait becomes more and more like the beautiful, original painting.  However, in a twist of fate, as Dorian’s portrait changes for the good, his personal physical appearance takes on what the portrait was, hideous.

One of his good deeds is to provide for Basil’s niece, Hetty (whom we met in the beginning of the show).  He meets with her incognito.  This is a big production number also taking place in the street were everyone sings in the production number “This Is My Chance”.

Dorian finds Sybil Vane and their son living on the street.  They are in poor health. He takes them back to his place and nurses them back to health.  He feels alive again and sings “Alive!”  When she recovers, she rejects him and leaves with her son.  Henry kidnaps Sybil and gives a note to her son for Dorian.  The boy doesn’t know Dorian by that name, (it gets more complicated but moving on).

Henry, by chance, meets Sybil’s brother (whom we have met in an earlier scene), at a local tavern and tells James that he knows where his long-lost sister is.  Of course, Henry explains that Dorian has her all tied up but says together they can rescue her and to meet him later.  Enters Dorian to meet Henry as Henry’s note said and they both go to get Sybil.  To cut to the chase, Henry tries to get James to kill Dorian, Hetty tries to stop him, Dorian and Henry fight and the portrait is unintentional stabbed and Dorian falls down from the stab wound to the portrait.  James shoots Henry (who was also shot and wounded in a previous scene), and rescues Sybil, his sister.

In the end Sybil forgives Dorian and they sing “Time Is’, and all are reunited and Dorian’s portrait, his physical appearance, and his family are restored as a big quartet ends the show.

This is a compelling story with a great variety and diversity of music.  Having been previously produce and revisited, it has been accepted and produced as a showcase production off Broadway.

It was tremendously received during its showcase run both by the performers and the sold-out audience every night.